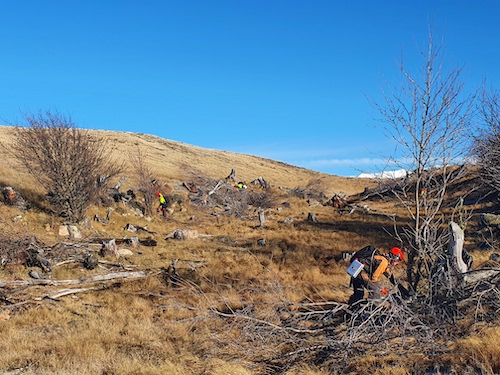 A plan to clear invasive pest plant infestations in an area three times the size of Auckland has seen 140,000 removed from the Mackenzie Basin in the past financial year.

The Land Information New Zealand (Linz) project being carried out in the South Island’s Mackenzie Basin is part of the Jobs for Nature initiative, and has so far employed about 70 people.

Linz Crown property manager Jerome Sheppard said the project began during the 2020/21 financial year, with $1.58 million of Jobs for Nature Government funding allocated to the work.

Sheppard said one of the major challenges was the sheer size of the area, with the 140,000 invasive pest plants removed from a 29,000 hectare area.

“The scale of this work is challenging, but we are excited about what can be achieved to protect the biodiversity in the area.”

The project also comes under the ambit of Te Manahuna Aoraki, a multi-agency programme which has the ambition of turning the Mackenzie Basin into a predator-free zone by 2040.

“This funding has allowed Te Manahuna Aoraki Project to significantly increase the existing broom and rowan control it was undertaking, and add four new weed species.

“The Jobs for Nature funding is allowing weed control in the region to be supercharged.

“By modelling potential weed spread we are able to act now when weed densities are low, and working with others we can stop invasive weeds before the problem gets much larger.

“Removing 140,000 of these invasive plants in the first year will make a huge difference to the biodiversity and landscape values of the project area.

“These weeds have the ability to spread quickly, and compete with native plants, preventing them from establishing. By hitting them hard, we can make sure they don’t have the opportunity to become as much of a problem as wilding pines.”