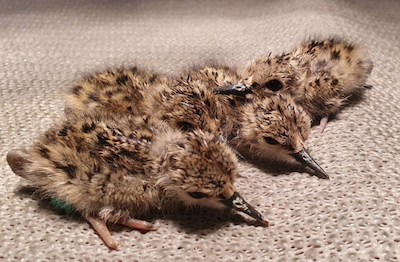 A boost to the population of one of the world’s most endangered birds could be the best Christmas present yet for Department of Conservation (DOC) staff fighting to save the kakī/black stilt.

There are only about 170 adult kakī in the wild, so the hatching of an “abnormally high” number of the critically endangered birds over three days is being hailed by those attempting to recover the species.

The average number of Christmas Day arrivals over the past decade has averaged just one, she said.

“We think it’s because the breeding season and nest making started a little late this year. We’re not sure exactly why the season started slowly, but we think it could be down to climate conditions.

“In previous years, most of the eggs would have already hatched by now.”

The eggs were collected from wild and captive kakī pairs before being artificially incubated at DOC’s kakī facility in Twizel.

The critically endangered birds are a taonga species and one of the rarest wading birds in the world.

They are largely found in braided riverbeds, side streams, swamps and tarns in Te Manahuna/Mackenzie Basin.

Brown said the chicks will be hand-reared at the facility before being released into the Mackenzie when they are about nine months old.

She said caring for the kakī chicks – raised in groups of four to seven – can be labour intensive.

“Each morning they are weighed, and their brooder is cleaned.

“They are also fed three times a day and allowed outside into a small aviary if the weather is warm enough. Staff monitor the chicks for signs they are unwell, as young chicks are susceptible to bacterial infections requiring treatment with antibiotics.’’

When the chicks are 30 days old, they are fitted with a combination of coloured bands and moved into a large flight aviary, Brown said.

This season has seen a slightly lower number of eggs collected from the wild compared to last year, which Brown said may to relate to climate conditions and because last year was a particularly good year.

There are 29 eggs and 117 chicks in the brooding facility at the moment. Juveniles released this year are not included in population counts until they reach breeding age in 2022, said Brown.

The non-migratory kakī are particularly vulnerable to predatory mammals, and a trapping network is a large part of efforts to ensure their survival.

Conservation project Te Manahuna Aoraki has installed more than 2000 traps in the Tasman, Cass, Godley and Macauley river valleys since 2018, increasing the network from 26,000 hectares to more than 60,000ha on both public and private land.