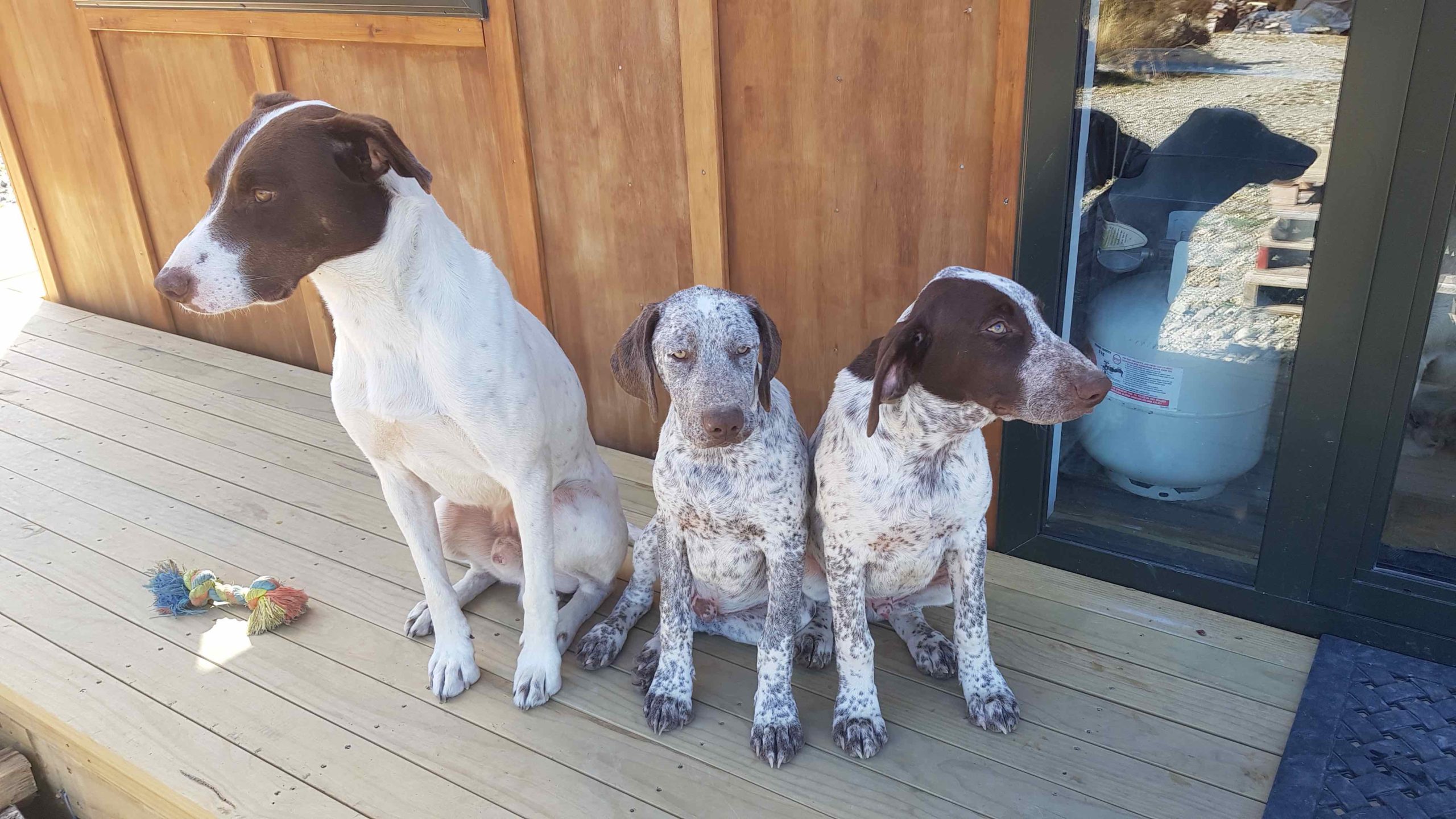 Conservation dogs on the job

Adriana Theobald and three of her canine charges (Julius, Sonny Bill and Slick) are the latest recruits to the Te Manahuna Aoraki team and will help with an ambitious research project - an attempt to rid the Tasman Valley of feral cats.

With seven dogs to care for at her rural Twizel property, life under Covid-19 lockdown is still rather busy for Department of Conservation dog handler Adriana Theobald.

Adriana’s days consist of keeping the dogs exercised, and training five-year-old Julius, a mixed breed hunting dog with a combination of German Shorthaired Pointer cross. Julius is due to be assessed by the Conservation Dogs Programme for his Interim Conservation Dog Certificate once the country is out of lockdown. Interim certification is all about behaviour and discipline, he and Adriana will have to show Julius is under control at all times and is well socialised. Once he has interim certification Adriana can start training in the presence of protected species, and on conservation land.

Adriana says Julius is already showing good promise. “As a handler you learn about their behaviour and body language. Julius will wag his tail if he smells a rabbit but if it’s a feral cat he’ll have muscle twitches and will then track it down. He has found several feral cats already and he’s pretty proud of himself.”

Dog handling is a passion Adriana shared with her husband Scott Theobald, who worked for the Department of Conservation and was tragically killed in a helicopter accident in 2018. “Scotty had a passion for dogs, especially his pig hunting dogs. It’s really important to me that I continue his legacy as a way to remember him and his inspirational work,” she says.

“At the moment it’s all about letting them be puppies but teaching them manners is also important at this stage. They are a bit like kids with a short attention span so we only do 5-10 minutes training at a time,” says Adriana. She will spend this year working with both of them before choosing one to be a feral cat detection dog. “One seems to be a bit of a thinker while the other is more high energy, I’ll see which one shows the most aptitude for the job,” she says.

While the majority of Conservation Dogs Programme dogs are used to sniffing out protected species like kiwi or whio/blue duck, there are only a handful of dogs in New Zealand that are trained to detect feral cats. Adriana has been using hunting dogs for the past seven years. Prior to that she had a conservation predator detection dog during her time working with Project Island Song in the Bay of Islands.

“The Te Manahuna Aoraki project reminds me a lot of Project Island Song. It is ambitious and pioneering and is all about partnerships. For me it’s quite special to be able to be involved in it with my dogs,” says Adriana.

Te Manahuna Aoraki Project Director Fiona McNab says DOC and Project River Recovery have undertaken feral cat control in the Tasman valley since 2005, and while many are caught, numbers of the apex predator have not reduced significantly. “Now we want to try to get rid of them completely. Feral cats are a real threat to endangered species like kakī black stilt and ngutuparore/wrybill and they are seen as one of the most difficult predators to manage so we are taking on an ambitious trial to see whether it’s possible to completely remove them from the Tasman Valley. Adriana and her conservation dogs will be a big part of the trial,” she says.

The trial will investigate how well different lures and baits work to attract feral cats, compare trapping techniques and test the level of effectiveness of feral cat detection dogs for feral cat control. The findings of this project will help other biodiversity projects undertake feral cat control